On Monday online safety charity Childnet announced the winners of the eighth annual Childnet Film Competition at a screening held for the competition finalists and industry guests at the British Film Institute on London’s Southbank. 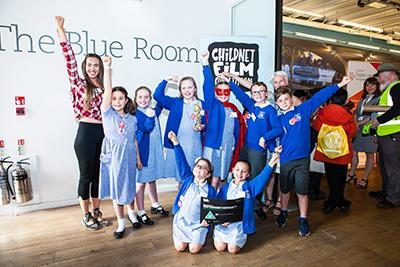 Judged by a panel of experts from the BBC, BBFC and the BFI, the two winning schools and the four other finalists will now see their films used as internet safety resources to educate other young people about how to ‘Be the change’ and use the internet positively and safely.

The Childnet Film Competition was founded in 2010 to promote the positive ways young people can learn from each other and empower and inspire young people aged 7-18 to use technology safely, positively and creatively.

Through the process the young people create valuable resources to educate their peers about staying safe online and develop their own understanding of what it means to be a good digital citizen.

Will Gardner, CEO of Childnet, said:
“The Childnet Film Competition is a great opportunity for young people to showcase their creative skills by creating engaging and educational videos to spread key online safety messages. The standard of entries this year has been exceptionally high and it’s clear to us that these young people are really passionate about making the internet a better place for all. All of the finalists’ films will be invaluable resources to help educate other young people about online safety.”

Childnet Education Projects Officer, Becky Nancarrow, said:
“This year’s Film Competition theme, ‘Be the change’, was all about inspiring young people to think about how they as young people can change the way that they use the internet for good.  Today we not only saw the time and dedication that has gone into creating these films but the passion young people have for creating a better internet for everyone.  It’s amazing that the young people’s films will continue to have an even wider impact, as they become resources for schools and youth groups to use”.

With over 127 entries from across the two categories; primary and secondary, entries ranged from animated films, to dramas about cyberbullying, to a news story about the positive uses of the internet.  6 schools attended the finalists’ event at the BFI in London before seeing their films on the big screen.

The Film Competition 2017 finalists’ said:
‘The film competition puts online safety into a practical setting, in school or at home children don’t always get it, but putting those messages into a film they get into it and understand it more because it’s encouraging them to do something for themselves; something that’s big, that other people will see, and something that’s fun.’  – Teacher

‘I think it’s a great way of teaching children how to be safe, because it’s also a fun way of being in a competition, so it’s competitive. Through the competition I learnt that even if you do something wrong you can always find a way to make it better’- Young person, primary category winner
​​​​​​​

‘I think this competition is really good for teaching people about online safety, on top of that we had a lot of fun doing the video! It took us a few hours and overall the experience was really good for us, and today was just the highlight’ – Young person, secondary category winner